Fitness inspiration – the unflattering picture that says it all

I suppose I’d better start with the elephant in the room. The picture I’m about to show you is – let’s face it – just not flattering. It’s slightly out of focus and makes me look bedraggled and frankly a bit unhinged. It’s not even been filtered or edited – this is it, in its raw, original form. It’s a far cry from the kind of image most people would use to illustrate fitspiration, or fitspo. Fitspo usually involves gym selfies, rippling abs, a tiny pout and a lot of posing.

But when I was asked (as part of a competition) to come up with a picture that summed up my fitness inspiration, I had no hesitation in choosing this one, which a friend snapped hurriedly on my phone in August last year. 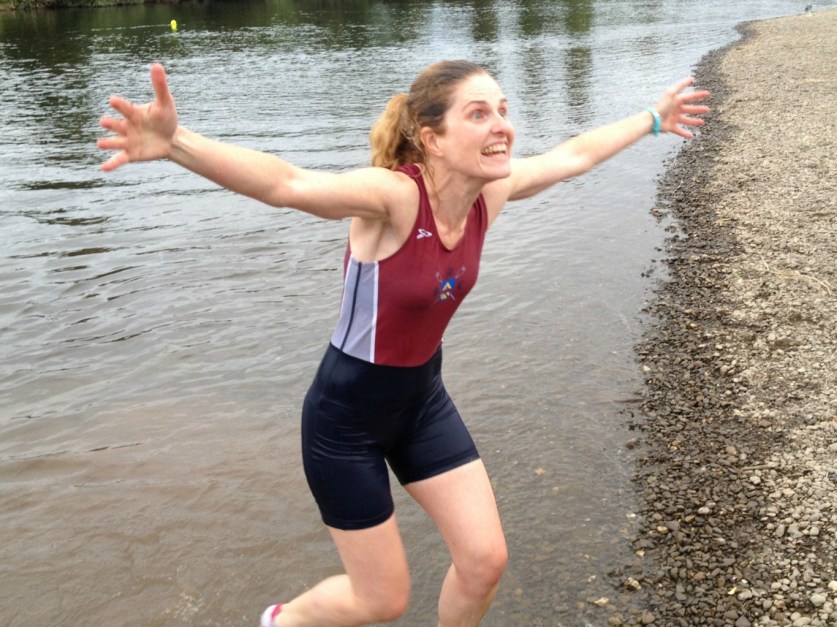 This picture may not make me look attractive or muscular or sexy or anything that would normally come under the fitspo hashtag… but it’s all the inspiration I need. It inspires me because it shows the sheer joy and elation I felt after overcoming the odds.

For me, fitness isn’t about taking cool pictures and posting them online. It’s about the thrill of becoming strong. It’s about pushing yourself to your limits and astonishing yourself with what your body – despite what your mind has been telling you – can do. It’s about fun and teamwork and encouraging each other to keep raising the bar. About trying and failing and trying again.

This picture was taken just after I’d won my first race as a rower. My journey to winning was a long and painful one. Having been the terminally unsporty kid at school – always the last to be picked for the team, and often teased for being chubby and ginger and unfit – it had taken me years to get used to the idea that I might be even remotely athletic. I’d spent most of my thirties under the shadow of M.E./C.F.S. and had been advised that anything other than the lightest exercise was a bad idea. It might, they said, be like that forever.

So when I started rowing in my forties, I assumed I’d be useless at it – and at first I was. I also assumed that the physical rigours would probably defeat me.

But I stuck at it. There was something about the technical challenge, combined with the beauty of the river and the camaraderie of the crew – that kept me coming back, week after painful week. I suffered knock-back after knock-back. I lost race after race. There were tears, disappointments, injustices. I got exhausted, demoralised, injured. But still I kept trying.

And finally, at the age of 46, having entered and lost 35 races, having never won a sporting trophy in my entire life… finally I won. This picture was taken right after – in the time-honoured rowing tradition – I had been hurled into the river by my crewmates. And it was the best feeling ever.

Of course, winning isn’t everything. But winning when you never thought you’d even be able to compete, and then when you’ve lost and lost and lost again… that’s inspiration.

Why I won't be buying from Boden any moreHoney vs. sugar - is honey better for you?
Comments: 2